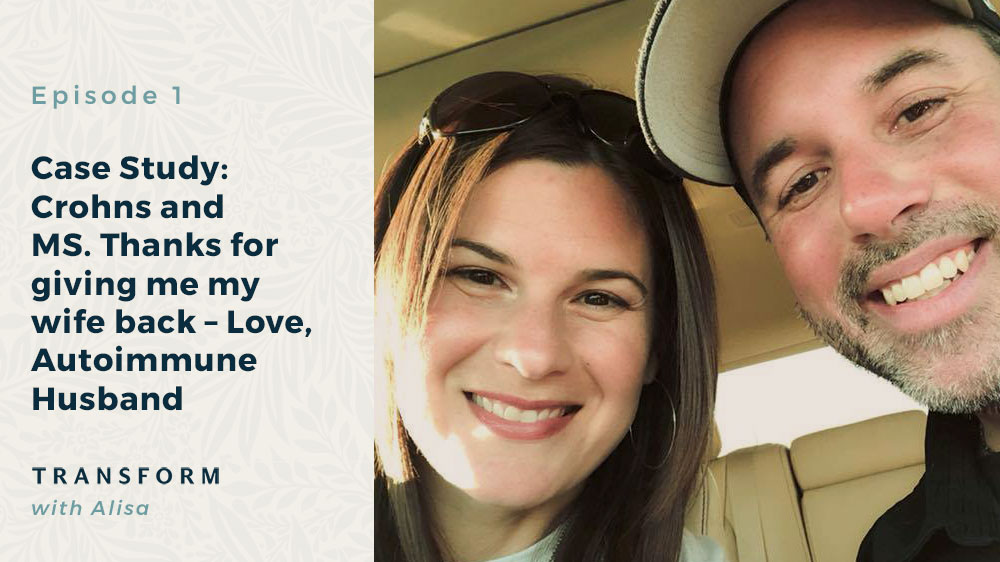 Transform with Dr. Maggie Yu
Case Study: Crohns and MS. Thanks for giving me my wife back - Love, Autoimmune Husband

Dr. Maggie Yu provides an eight-week online coaching program to transform autoimmune disease naturally, and Alisa is a recent graduate from that program. She is here today to talk about where she was before starting the program, what her outcomes have been, and what the process was like through this journey.

Alisa introduces herself as a 41-year-old married mother of two kids. She started her health journey in 2002 when she was diagnosed with MS. It was a big shock, but thankfully, her symptoms were minimal. However, in 2005, Alisa was diagnosed with Crohn’s disease which was a big struggle for her. In the fall of last year, her doctors were recommending a bowel resection to avoid having to do an emergency one later. Alisa quickly agreed to the surgery and was expecting the outcome to be dramatic and life-changing, but it didn’t turn out how she had expected. Alisa talks about the struggle of her recovery and how it affected everything in her life. She did research and decided she needed something outside-the-box, which led her to Dr. Yu and her program.

Graduating from the program just about a month ago, Alisa has already gone on a trip to Europe, which she says would have made her very anxious beforehand. She talks about some of the things that she learned in the program, citing vitamin deficiency advice that was specific to her as the one of the most valuable. This helped her to collaborate with the right providers so she could get the exact treatment that she needed. We also learn about the food mapping that Alisa received and her amazement that she has never heard of food mapping before, despite having an issue directly related to her bowels.

Alisa’s husband Omar then joins in on the conversation to share his experience. Dr. Yu invites spouses to be included on the initial phone call with people who are interested in starting the program, so Dr. Maggie asks Omar what his thoughts were during that first phone call. He says that it was good to get to know Dr. Maggie, because when pursuing a program to fix such a problem, it always seems like you’re talking to a salesperson. Omar also states how Dr. Yu is true to her word and doesn’t promise anything, instead opting to provide the information needed and letting the person decide if they want to make a change in their life or not. The couple are asked how eating has changed in their family after the program, with Omar expressing that the rest of the family are still able to eat the same.

Having a lot of anxiety before entering the program, Alisa reports that she now feels in control. She says that everything she ate was a big question before, but now she is aware of complications that come with eating certain foods and can judge whether the trade off is worth it or not. Dr. Maggie asks if the program feels like going to see a doctor or nutritionist for eight weeks, and Alisa speaks to how it is like nothing she has ever experienced. A significant reason why she feels this way is because this is the only time Alisa feels like she has been treated as a whole person, as opposed to how she feels when doctors look at issues in isolation of others.

Alisa had sleeping problems for years and thought she had tried everything to remedy them, so we get to hear just how quickly these issues were vastly improved in the program. The final question that Dr. Yu asks Alisa is if everything was worth it. Alisa says that it was worth it “a million times over” and that Dr. Maggie is priceless. She also expresses her appreciation of how supportive everyone in the group is and the importance of being able to talk to people who relate to her struggles.