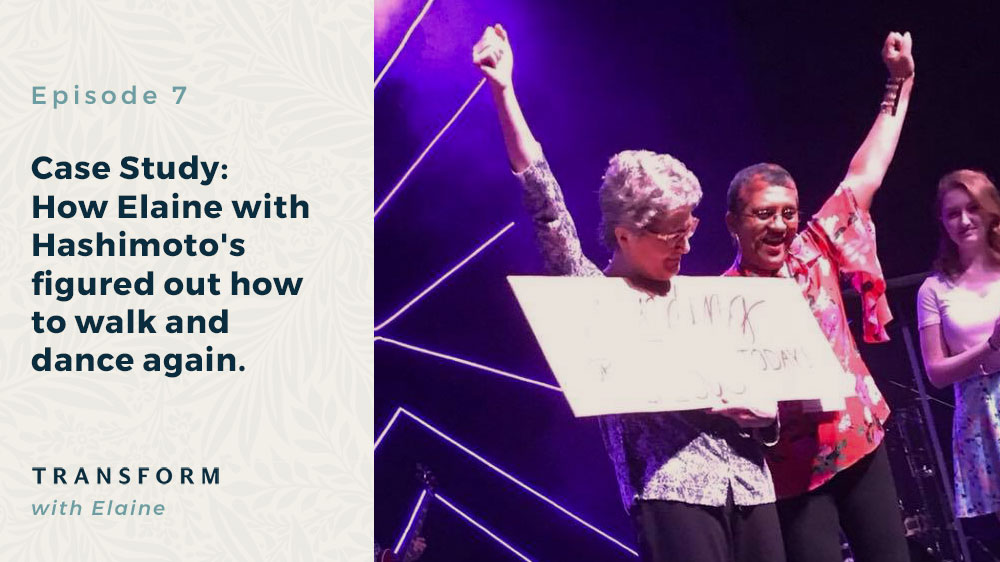 Transform with Dr. Maggie Yu
Case Study: How Elaine with Hashimoto's figured out how to walk and dance again.

The past year has been a terrible downward spiral for Elaine’s health. It all began about two and a half years ago when she began the onset of sciatica and back pain, which then grew into a whole different creature. An MRI showed Elaine that she had some spinal issues, but no doctors could figure out the pain associated with them. She became bed ridden and her pain soon spread to her entire body. She went to Johns Hopkins Hospital, one of the most renowned in the world, but even that team of skilled doctors could not figure out Elaine’s issues.

Having gone through the program, Elaine is now capable of determining the cause-and-effect relationships that the doctors could not. The program identified that she had severe hormone imbalances along with some vitamin issues, as well as not actually having the gut problems she thought she did. Elaine talks about how she had to change her mindset to break what she describes as a “pain cycle,” and Dr. Yu comments on how Elaine originally thought she was destined to be sick forever.

We hear about the activities that Elaine now does that she was unable to do eight weeks ago, with the first being that she drove herself to the grocery store this week for the first time in a year. She also cooks for her family regularly, another activity that she hasn’t done in a year. Elaine spent many days alone in bed when her husband would have to go to work, but now, she says she is never alone because she has realized the importance of having support from the community around her. She always has somebody keeping her company, whether it be at home or when she is out and about.

Dr. Maggie asks what helped Elaine become decisive about jumping into the program and committing to make a change. Elaine answers by saying that the personalization of the program greatly encouraged her. She had researched other programs online that seemed to apply the same remedies to everyone, but she knew that she had to do something that was unique to her. She says that her husband proclaims he would have paid more than 10x for the program had he known that his wife would achieve these results.

Interaction with other people in the program is a vital aspect of it, so Elaine discusses how much this community has encouraged and motivated her. She comments on how the other members of the community are in the same situation as her and see the same results. Elaine asserts that her results are typical of everyone else who commits to the program for eight weeks. Ironically, Elaine had convinced herself before starting the program that she was going to be the worst case that Dr. Yu ever saw and that the program wouldn’t be able to help.

Elaine says that her family is getting her back. She can sit next to her husband at church, and her son can see her as he plays guitar on stage. Dr. Maggie thanks Elaine for sharing her story, but Elaine reiterates that Dr. Yu is not half as thankful as her for being able to live again.