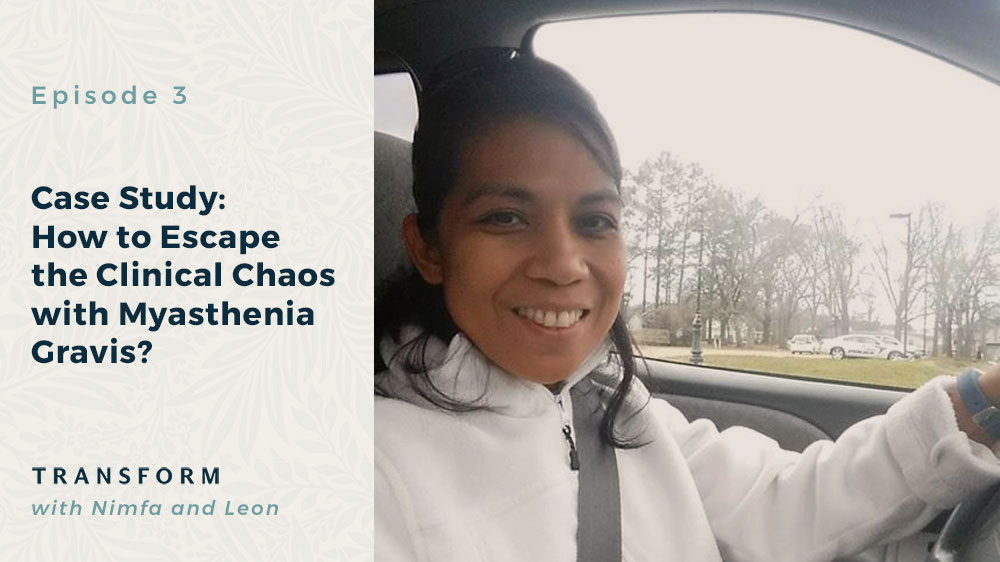 Transform with Dr. Maggie Yu
Case Study: How to Escape the Clinical Chaos with Myasthenia Gravis?

Today, Dr. Maggie Yu is interviewing Nimfa and Leon. When any autoimmune disease flares, it can be so life-threatening and debilitating that it presents a very hopeless situation. Nimfa and Leon were able to turn this around in just a matter of weeks, and they share their story about how they accomplished this.

Nimfa and Leon start by sharing where they were before they started Dr. Yu’s program. Nimfa says that she was diagnosed with myasthenia gravis in 2016. She went through all the conventional treatments but still always had flares, the worst of which were last year and put her in the hospital three times. Leon says that every time Nimfa went to the hospital, her condition seemed to be getting worse. He shares how his daily life was regarding Nimfa, including making sure that she was able to get back and forth to the bathroom. They even had to put a toilet in their bedroom because it was so difficult for her. Leon also recalls how an allergic reaction that Nimfa experienced while in the hospital nearly killed her.

We hear about how Nimfa began to notice differences while she was still in the program. She discusses how upon entering the program, her main focus was on regaining her ability and desire to eat. The program helped her realize that there are so many things connected to her autoimmune disease besides food. She happily talks about how she was able to go out with Leon to get groceries and lower some of her medication dosages. Leon jumps in to express how a while ago, Nimfa wouldn’t even have been able to have this conversation because she found speaking to drain her energy.

Dr. Yu asks the couple about what they think the true reasons are that make her program successful. Leon says the first reason is that it helps to identify the cause. He believes that many people are trying to fix just symptoms rather than the root issue. He adds that motivation from alumni of the program was instrumental as well. Nimfa then talks about how using her personal data was crucial as opposed to using generalized data that fits everybody.

With Dr. Maggie’s mindset being “I teach people to fish, I don’t throw fish at people,” she asks Leon if she successfully helped him and Nimfa uncover the causes. Leon proclaims that Dr. Yu educated them enough so that they are able to continue the program themselves, and they can even ask questions to traditional doctors and get their feedback. Nimfa speaks more to how her vitamin deficiencies, how she ate, and more contributed to her flairs.

To finish the interview, Dr. Maggie asks Nimfa how her outcomes are compared to other people she saw in testimonial videos for the program. Nimfa reiterates that she is experiencing a great outcome that lets her do the things that she loves to do once again. Nimfa and Leon also state that the investment of time and money was well worth it: Nimfa has recently driven again for the first time in months, and that wouldn’t be possible without Dr. Maggie Yu’s program.