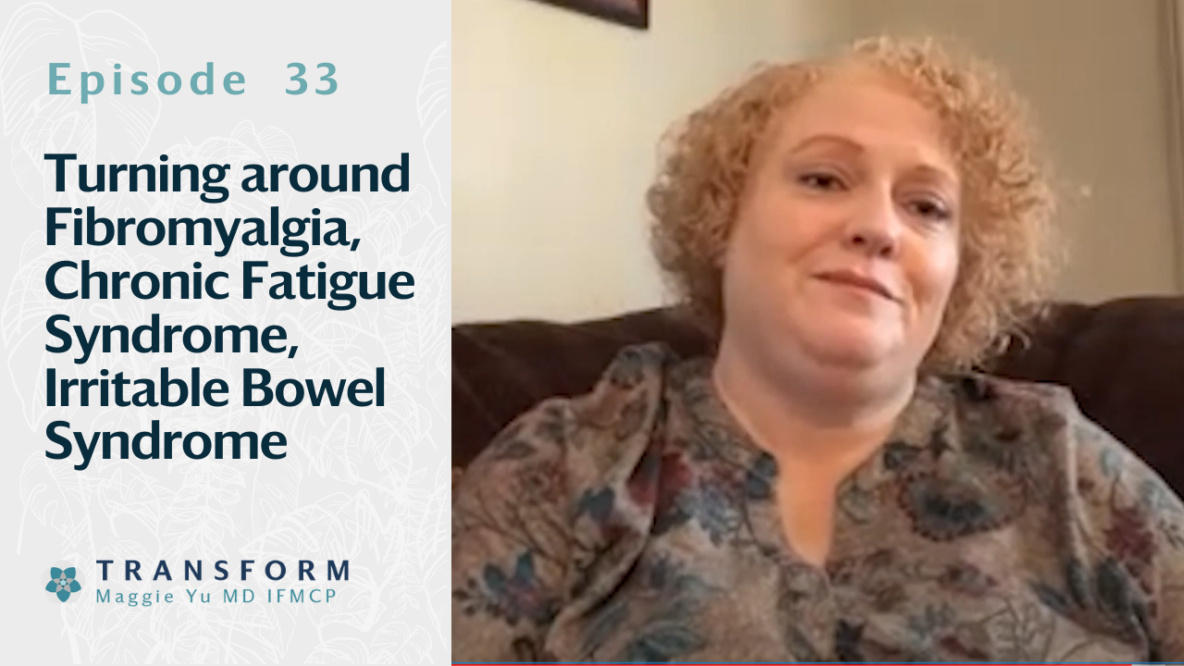 Turning around Fibromyalgia, Chronic Fatigue Syndrome, Irritable Bowel Syndrome, Hormonal Hell Joy had suffered for over 2 decades with symptoms from fibromyalgia which she was told was in her head, chronic fatigue syndrome, irritable bowel syndrome, endometriosis with severe pain with a hysterectomy and persistent severe hot flashes, insomnia, anxiety and depression that dropped her quality of life to a zero. Without support from her partner, she “stalked” all the video training and was active in our Facebook group. Finally, she said life had gotten so bad, that she got resourceful and made the plunge.

See where she is two months later and learn how her husband figured out, “happy wife = happy life.”

Joy had multiple diagnoses over the years – Fibromyalgia, Chronic Fatigue Syndrome, Endometriosis, Brain Fog, Irritable Bowel Syndrome, Hypothyroidism, Clinical Depression, Anxiety, Insomnia and  Excessive Sweating.  She started menopause very early at the age of 32 and had a total hysterectomy at 38.

Her main frustration was not being able to find a doctor who would test for food allergies or hormones. Also, more frustrating than the symptoms she had been experiencing for years was when doctors would tell her there was nothing that could be done and that she should learn to live with these debilitating symptoms. They also couldn’t explain “why” she had these symptoms.

She needed to figure out why she was always exhausted – no matter how long she slept, why she’d wake up and could barely function the first half of the day, what caused chronic pain and what made it worse.  She wanted to know why she constantly felt as though she was going to faint, why she was continually gaining weight,  even though she was eating the same, as well as why she was constantly experiencing excessive sweating.

The three things Joy found most impactful about the program were:

– If participants did what Dr. Maggie explained, they would see subtle increasing improvements or even some quick drastic improvements.

– Having the right testing done and learning how to troubleshoot problems that may arise in the future by knowing what to test for, being able to read the test results, and knowing where testing can be ordered if doctors choose not to.

– Gaining the knowledge of how important proper digestion is so that our stomachs absorb the vitamins and nutrients in the food we eat and how what and when we eat affects our blood sugar levels that in turn can cause various symptoms.

Since beginning the program, Joy says she falls asleep more easily and doesn’t wake up during the night.  That is HUGE and because of better sleep, she is less tired during the day and it’s easier for her to get out of bed in the morning.  Her brain fog is tons better – she can focus and remember things again, she has A LOT less pain, her anxiety and depression have improved, and she’s even experiencing fewer hot flashes.  To top it off,  she’s lost 13 pounds, had less hair loss and her digestion is improving.  Now she is finally able once again to drink water without feeling nauseous.

Some other positive benefits:  Both her friend and her primary care doctor say she looks vibrant and less tired and her husband says he can tell that she’s happier.  She’s quit having to cancel plans to go out, she is able to run more than one errand in a day, she attends church regularly again and now feels good about setting goals for her future!

Despite the years and years of suffering before our Transform Immune Program, Joy almost didn’t join the program because she was skeptical that the results of people in the program were real.   She didn’t think Dr. Maggie could figure out what would help her – because no other doctor had been able to.  She didn’t see how the program could help her with her issues – even though it had helped other so many other people.  The thing that really kept her from joining the program was that she felt like she didn’t have her husband’s support.

Joy’s favorite thing about Dr. Maggie’s Transform Program was the actual method of teaching behind the program.

Dr. Maggie doesn’t just say “just do this and you’ll feel better”.  She actually teaches what each part of the body was reacting to cause each symptom. Dr. Maggie answers the numerous “why” questions participants long to know the answers to for so long.  She teaches about our bodies and the roles each of its parts plays.

The program is interactive causing participants to watch each module’s videos, do homework around what they were learning, doing the mindset work, and participate in mastermind calls. This all leads participants to be more proactive in their healing journeys.

This helped her understand what she was saying when going over her own results. This program style also shows participants that we aren’t striped unicorns…that there are plenty of others going through similar – if not the same, issues. The program helped Joy build friendships with others who can relate to her and what she has suffered through.

Joy said she’d recommend our program to anyone who has symptoms, whether diagnosed or not and is tired of going from doctor to doctor in hopes of getting relief. Also to anyone who’s been told they’ll just have to just learn to live with their symptoms. Lastly, to anyone who has lost all hope, is desperate, and no longer wants to live if their quality of life doesn’t improve.

She claims that she was ALL of these people before she joined the Transform Autoimmune Program.

If you would like to learn more about how we can help you specifically turn your symptoms around, start a chat with our team today!