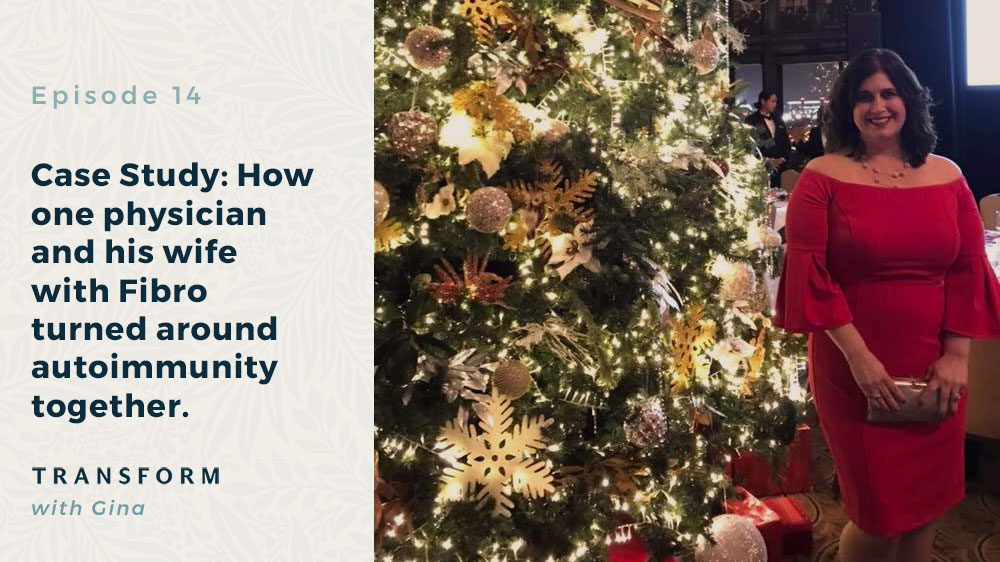 Transform with Dr. Maggie Yu
Case Study: How one physician and his wife with Fibro turned around autoimmunity together.

Gina and her husband, Gus, join Dr. Maggie Yu in this episode to talk about how autoimmune disease can make you feel crazy, but also how it is possible to move from craziness to joy. Gina just graduated from Dr. Yu’s eight-week program for naturally transforming autoimmune disease.

Prior to beginning the program, Gina was diagnosed with fibromyalgia and an elevated CRP level. She came into the program very lethargic, often waking up in the morning feeling like she hadn’t slept at all. She was affected by bloating, weight gain, irritability, bad PMS, and headaches. Finally, she decided it was time to figure out what to do, which led her to Dr. Yu’s Transform Autoimmune program.

Gus, who is a physician, talks about how seeing Gina was particularly difficult from his standpoint. He saw other physicians running tests repeatedly on Gina without providing any positive outcomes. He mentions how doctors would prescribe her different medications in pill-form, which was unreasonable because Gina often didn’t even have the strength to swallow these. Gina adds that the doctors never got to the root of her problems. She likened the pills that were prescribed to her as being just a bandage. Dr. Yu talks about how sometimes traditional physicians are thought to be uncaring because they just prescribe medications but understands that that’s just how they are trained.

Dr. Yu asks what findings in the program surprised Gina, who answers with her hormone and Candida issues. She also says that going gluten free because of what she discovered in the program has been a game changer. Gina had previously tried the AIP diet, which is often recommended for people with autoimmune disease, but the Transform Autoimmune program taught her that this is not effective for her. The program’s food mapping determined that she was actually allowed to eat certain foods that she had been restricted from on that diet. Gina goes further into detail about how her food mapping uncovered that most of her issues with eating were caused by an infection, not by intolerance.

Gina’s hormone results showed that she had a ridiculously high amount of both estrogen and testosterone, and she felt a sense of relief from these results because she now had something to attribute her symptoms to. Since fixing her hormones, she says that she is sleeping better and losing weight. Gina’s face inflammation is coming down, and she can even start wearing her wedding rings again. She feels revitalized and full of energy. Gina used to take naps regularly, but states that she hasn’t taken one in six weeks. She had a moment of realization this week where she was so happy about feeling good for the first time in years, and proclaims that she finally has normal days like a normal person.

In the program, Gina loved feeling the accountability that came from having regular group calls with other people in the program. They could relate to her pain and anxiety, and everyone learned from each other. She declares that if the program didn’t have a group aspect, she’s not sure if she would have gotten the same results. Gina says that now, her life has been changed forever.