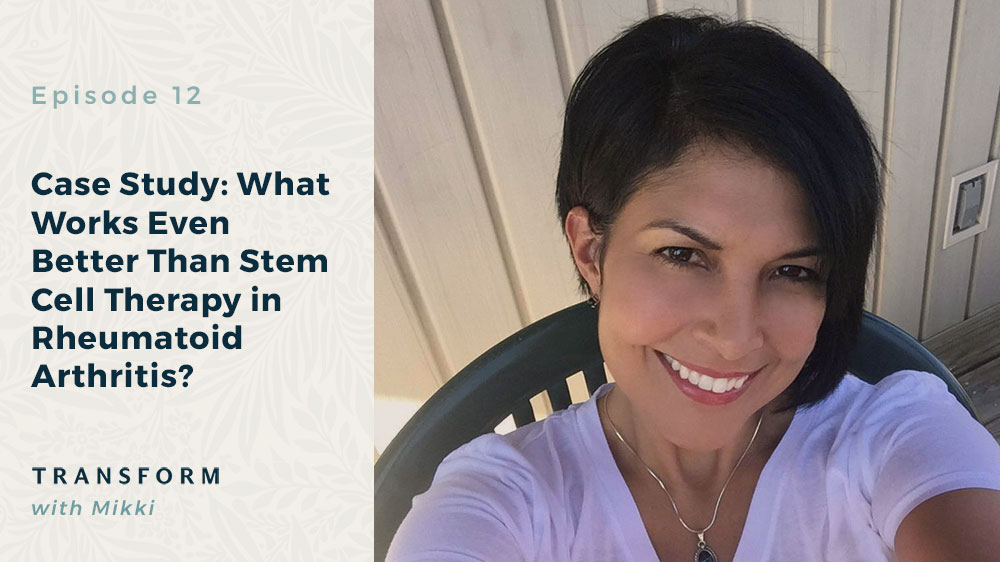 Mikki, who graduated from the Transform Autoimmune Disease Naturally program roughly a month ago, sits down with Dr. Yu in this episode. She is a busy mom and executive who has been dealing with rheumatoid arthritis and colitis for a long time. A lot of today’s discussion revolves around dealing with the pain that comes from autoimmune disease and what can be done about it.

Mikki says that before enrolling in Dr. Yu’s program, on a pain scale of one to ten, her day-to-day pain was a twenty. She called Dr. Yu in tears because she thought she had tried everything. Mikki goes through the list of things she has done in an attempt to ease her pain, which includes elimination diets, embryonic stem cell treatment, and biomagnetism. If it’s out there, she has tried it. When she first called Dr. Yu, Mikki was in so much pain that she could hardly even move her wrist and had to wear braces.

We hear that Mikki’s pain level is now at a four or five, and she admits it’s not as low as it could be because she is not as disciplined as she should be. Mikki knows what her triggers are now because of the food mapping component of Dr. Yu’s program, but she still sometimes chooses to eat those foods. She says that it’s no longer a guessing game of what will bring her pain, rather she knows the exact sources. The food mapping was a major linchpin that helped reduce Mikki’s pain level to where it is today. She then reveals why food mapping helped in ways that elimination diets could not.

It took Mikki about ten days of enrollment in the program to get out of the braces that she was wearing to slightly reduce her pain. She learned in the program that she shouldn’t be eating gluten and went through withdrawals when halting her consumption of it. Mikki reflects upon a call with Dr. Yu during these withdrawals in which she received motivation to keep moving in the right direction. Mikki loved the support given to her from Dr. Yu, in addition to support received from other members who were going through the program. For the first time, she felt like she was talking to people she could relate to.

Dr. Yu asks Mikki to comment on how the program trained her to have conversations with her gastroenterology doctor. Mikki proceeds to talk about becoming prepared via being armed with the proper information. This was great for Mikki because, prior to her enrollment, she was so confused with all of the conflicting information available online about dealing with autoimmune disease. She recalls how she didn’t believe Dr. Yu’s video when she first saw it but is thankful that her feelings of desperation led her to make the call. Mikki asserts that no other treatments were even running the right tests on her and tells us about how brushing her teeth one morning made her realize the program was working.

Mikki now passionately tells everyone she knows that they have got to call Dr. Yu. She says that she is speaking from her heart and that doing this interview was not easy for her. Mikki feels like this program has been a gift to her that she has to share.