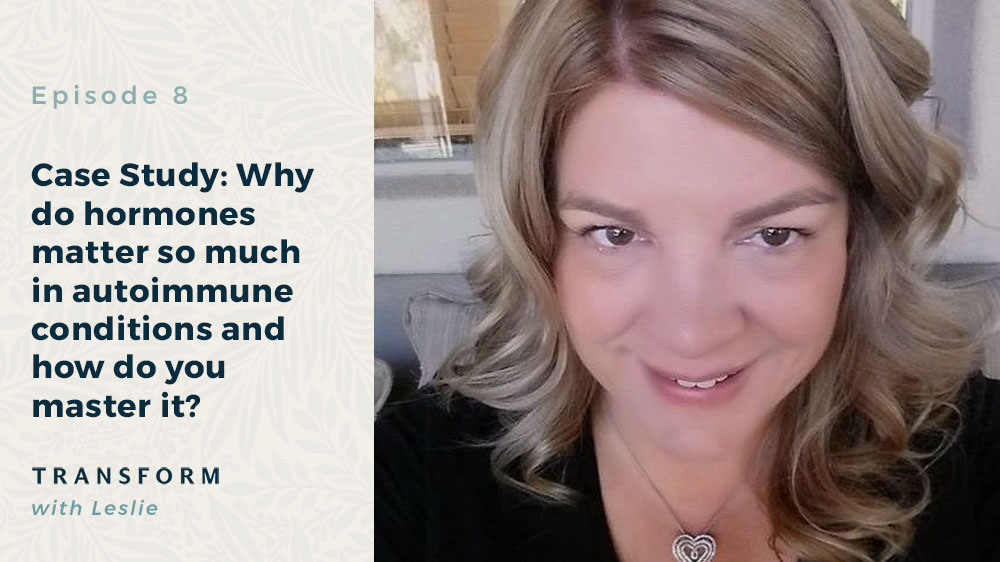 Transform with Dr. Maggie Yu
Case Study: Why do hormones matter so much in autoimmune conditions and how do you master it?

Dr. Maggie Yu is speaking with Leslie Savage today. She is a registered nurse who has struggled with rheumatoid arthritis and hormonal issues, but is now in her final week of Dr. Yu’s Transform Autoimmune Disease Naturally program.

Leslie has had to deal with a lot of pain issues. She was going to her chiropractor three to four times a week just to be able to keep working her job. After being referred to a rheumatologist, she was diagnosed with RA. Leslie was offered medication that would suppress her immune system, but because of the many germs in her workplace, she opted to not take them. She felt like this was going to be a career-ending diagnosis. Every day, Leslie would dread going to work because even something as simple as writing was difficult for her.

During the first week of being enrolled in Dr. Yu’s program, Leslie was already feeling better. She regained the ability to sleep and her gut issues were already starting to clear up because of the dietary changes that were recommended to her. By week four, Leslie had even picked up a second job. She says that she hasn’t felt like this since she was in her twenties.

Before starting the program, besides work, even just living day-to-day life was difficult for Leslie. Her husband even had to help her get dressed because of the pain and agony Leslie was constantly experiencing. She was in a place, mentally, that nobody wants to go. Leslie says that she experienced depression from thinking what the future would hold because each day brought a new symptom to her.

Dr. Yu asks Leslie if she thinks she would have gotten these current results had she gone the rheumatologist route. Leslie says that she wouldn’t have and proceeds to talk about someone she knows who also has RA and is getting treated in the conventional way. She says that she is able to share her outcome because it is real, and she lives it every day. She no longer dreads getting out of bed because of the pain and has become more active. Additionally, she is eating healthier than she ever has before.

Leslie comments on how there are many components of Dr. Yu’s program that helped her get to where she is now, but if she had to pick the biggest one, it would be hormone-related. The testing that Leslie was subject to revealed her problems with the custom data it provided. Now, she is taking the proper supplements and applauds how Dr. Yu doesn’t promote making meals out of supplements. Leslie then discusses how the data she received was custom to her, and that while a “magic supplement” may exist, it will surely be different from person to person. Dr. Yu provides insight regarding how many people have autoimmune diseases that are not detectable by conventional blood tests.

In the process of learning in a group setting, a vast amount of knowledge was received by Leslie about various hormonal patterns. Leslie says that the best part is that if anything changes with her hormones in the future, she will know what to do. She states that she is very happy with the Transform Autoimmune Disease Naturally program because it’s not just today that she feels good, it’s the future too. For anyone who is not sure if they should enroll in Dr. Yu’s program, Leslie insists that you remember that you are worth it. She wishes everyone with autoimmune disease would take part in Dr. Yu’s program.